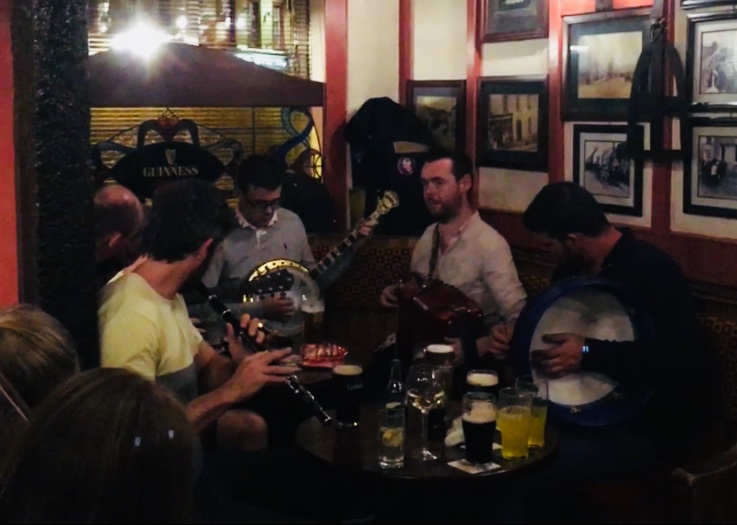 This is a three-part series about the epic ancestral music that runs through our bones.

When I knew we were going to be in Ireland this summer I started searching for ways to connect to Irish music. JT Beggs, a friend I met in California, told me about touring through Ireland, attending music ‘summer schools’ and the outstanding music sessions in local pubs. (Lucia and I ended up sitting in on a dozen phenomenal pub sessions during our time there, many of which I recorded, but that’s another blog post or three). He gave me some great leads and I found a summer school that was happening during the time that Lucia and I would be there.

The Joe Mooney Summer school happens in Drumshambo, County Leitrim.  Imagine a tiny town that has a tiny main street, a church, a school and three pubs. Once a year it doubles in size for this music summer school. Which is outrageous, by the way. This is a relatively out of the way place. There are no facilities. There are no extensive hotel-motel strips. I get the sense that the collective town spirit wants to lift up Irish heritage, and values the importance of the next generation learning traditional music.

People open up their homes and make space for musicians, young students, families, teachers and international travelers, like ourselves, to stay and share stories and learn. We had an amazing experience with our host family, involving an ancestral fiddle which sat in the attic for 25 years. Which is another story.

There are music sessions in four corners of each small pub and then twice as many literally in the streets cause there is nowhere else to go. Each of these ‘sessions’ is welcoming, roughly in the shape of a circle, which you can join by pulling up a chair to listen or play if you know the tune.

The first night Lucia and I were cruising around to all of these sessions and we met a young couple who had a baby. We said hello and gave the back story to where we are from and our quest in Ireland.  The young mom was the musician in the family, she plays fiddle. I asked about her musical lineage and she said that her grandfather was the next musician and he played fiddle too. I mentioned that my grandfather was our connection to Ireland.

Let’s pause that moment, hold it there, while I give you the background about tracing my genealogy back to a specific place in Ireland.

A remnant of a memory, carried in a treasure box for an unknown seeker, laid dormant on a dusty shelf, waiting to be asked to open and come to life.

Growing up there was a fun distant-cousins event that would happen, maybe every three years? As the youngest of four children, I didn’t pay too much attention to the details and ‘how everyone is related”. But it was definitely fun to have a whole big family arrive seemingly out of the blue for a weekend because they were family on my mom’s cousins side. They were the Scullys, and they would travel between Indianapolis and Springfield, I think. Turns out that the father was first cousins with my mom. And the upstream connection was that my mom’s dad, John Carroll, had a sister, Fran Carroll who married a Scully and started that branch of the family. Scully is an Irish name. And between the Carroll immigrants and the Scully heritage, there was more of an Irish identity than my family.

So this is where I went to get a clue when my mom could not remember her grandparent’s names. I called the son of Fran Scully and at 75 Gerry knew a couple details that opened up a world of knowledge. The first was the name of a cemetery in Springfield Ma, where relatives were buried. That small piece of info sent me on an adventure to St. Michaels cemetery, which is a whole other story, and a crazy synchronicity mystery of tombstones. And secondly, he told me a piece of oral history, that he remembered his mother, Fran Carroll Scully, (daughter of the Irish immigrants in the 1880’s), telling him from when she was little. When Fran was little, she remembers sending packages back to Ireland to a county called Roscommon.

This tiny little seemingly insignificant scrap of oral history has over time become enormously significant because I have yet to find any genealogical records tying us back to a place in Ireland.  A remnant of a memory, carried in a treasure box for an unknown seeker, laid dormant on a dusty shelf, waiting to be asked to open and come to life.

(I’m an avid researcher and stop at nothing. But at this point, there is no known location in Ireland at this time where my relatives came from. I’ll spare you the drama and details of the research in the national library in Dublin, but will write a post for those seeking ancestry, cause we learned a lot!)

As it turns out, County Roscommon is next door to County Leitrim, where the Joe Mooney Summer school was located. I mentioned all this to the fiddler mother, in a fairly concise way, hard to believe, I know. She was genuinely interested because she was local and had family from both counties.  She asked me what my grandfather’s name was. “John Carroll”, I said. “Oh!, that’s my grandfathers name!”, she said, “… John Carroll“.  She went on to say “there are loads of Carroll’s around here, so you are not far from home”.

That was a fulfilling moment for me, (which makes all the back story worth it for the reader, I hope). This moment was not just fulfilling for just for me, but for my daughter downstream, my siblings alongside me and my parents upstream. Indeed we began to see shops with the name “Carroll” up top, unlike any other county we traveled in after that.

The next morning it was music lessons time.

John will be Back: Part One Amnesia